Etheroll has processed nearly $200m in wagers from over 5,600 unique accounts since launching in April 2017.

This modest gambling dapp has found a profitable niche for players that want to roll the dice on the Ethereum blockchain. The smart contracts powering this dapp keep 1% for the house.

Etheroll has been partly unlucky to only profit $162k, tempered by lucky players and significant transaction fees. But perhaps more impressive than its volumes is its sustained activity. 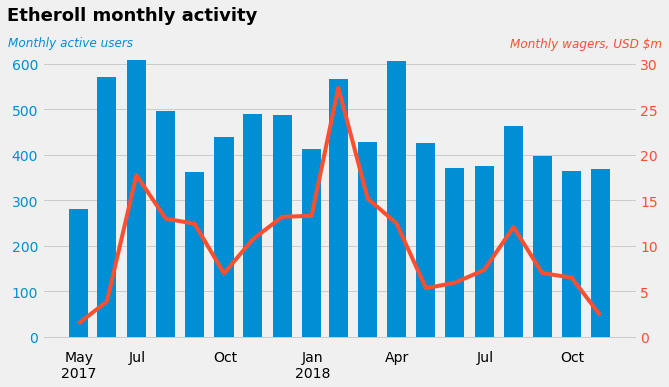 Virtual 100-sided dice start to roll when gamblers send ether and a small amount of extra data in Ethereum transactions to Etheroll. An oracle (an external data source) generates a random number to determine if each bet wins or loses.

The rolling stops when the oracle posts a result back to the blockchain (in a separate transaction). Wins are paid out minus the house edge. Losses are, naturally, kept by the house.

Etheroll pays transaction fees for every bet settled by the oracle. A few hundred thousand bets later and... Etheroll has spent over $750k to settle bets on the Ethereum network.

Significant expenses, along with bad luck through a period of rapid USD/ETH price appreciation, have left Etheroll with $162k in profit and room to further optimize the bottom line.

If the dapp is considered as an early experiment in decentralized gambling, the feasibility and profitability are easily proven.

Etheroll is easy to use

Most dapps are notoriously hard to use. Etheroll is easy and focuses on user experience with well maintained code.

A development update added support for MetaMask and removed significant barriers to entry just before July 2017. The first peak in activity directly followed and Etheroll established itself as one of the most successful dapps.

And, perhaps more importantly, the game is not tokenized. Players do not go through extra steps to gamble by trading ether for specific gaming tokens. Instead, Etheroll takes bets in Ethereum’s native currency.

While Etheroll does not use a token for its player facing game, Etheroll did sell DICE tokens to crowdfund the house bankroll. Token holders are eligible to a share of the house profit each quarter.

The large house bankroll ($1.1m as of publishing) supports big bets and attracts whales. And whales are vital. Etheroll’s top 20 players generate half its wagers and well over half its profit. An unprofitable minimum bet means that the bottom half of players actually represent a cost. 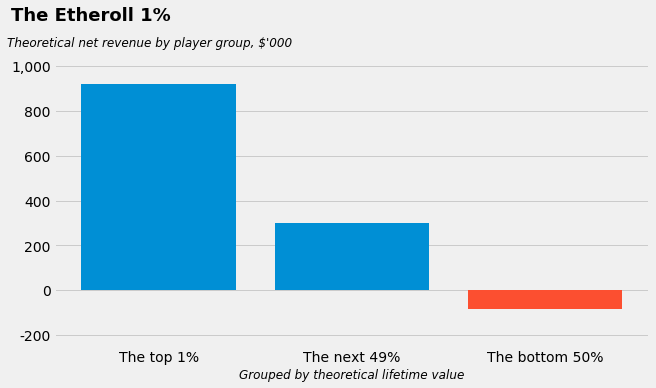 Why are players using dapps to gamble?

The speed of dapps are limited by the Ethereum network's current throughput of ~15 transactions per second. There are also transaction fees to consider.

But these gamblers are willing to wait and pay. In exchange, they interact with transparent and censorship resistant smart contracts without entrusting a third-party to hold their account balance. Players' risk exposure to operator error or fraud is limited to a single bet and only for as long as each bet takes to settle.

Plus players can gamble from regions that might otherwise enforce strict controls. Jurisdictional controls are hard to enforce on smart contracts -- or at least not yet worth enforcing.

Note: Etheroll is not fully trustless and has two centralized points of failure -- the oracle and the contract owner.

New gambling dapps are appearing on the blockchain. Competing dapps will suceed by attracting whales. Tactics must progress beyond building a highly usable product as transparent source code will lead to product commoditization.

Only time will tell how players and operators react to the changing environment.

Stay up to date! Get the latest updates delivered straight to your inbox

We email a weekly performance report on the Uniswap Protocol. Our email helps analysts, fund managers, developers and community members keep track of one of the most exciting initiatives in Open Finance.

Stay up to date! Get the latest updates delivered straight to your inbox